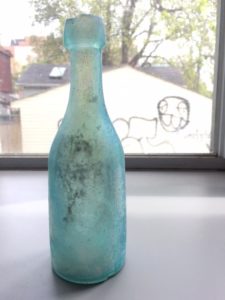 This pretty aqua soda water bottle was much admired when it came into the lab for washing, since it was completely intact except for a small nick along the top edge of the “blob” style finish.

The artifact had an extra surprise underneath; the base is embossed with the manufacturer “Hamilton Glass Works.” Once we discovered that this bottle was made so close to home, we had to know more!

Hamilton in the 1860s was a bustling city and already one of Canada’s leading manufacturing centres. Within the city limits many druggists were bottling their own medicines and cures, and two soda water companies were selling products throughout the region. With these local customers in place, a group of Hamilton manufacturers pulled together some capital to open their own glassworks in collaboration with a glass manufacturer from Lancaster, New York. This glassworks was quite an innovation; it was the first one in Hamilton, and one of only five in Canada.

The ownership team of the Hamilton Glass Works fluctuated over time. The original group included Lyman Moore, who was the first owner of the Hamilton Street Railway, back when the HSR was a collection of horse drawn streetcars. Hamilton Glass Works expanded in size over the rest of the nineteenth century, and was acquired by Diamond in 1891, the makers of the famous Crown canning jar.

That block is now primarily residential with some small storefronts on James Street, but in the mid-nineteenth century the block was packed with an industrial complex that included two large furnace rooms and tall smoke stacks pumping ash into the sky.  You can see the size of the glass works in this pictorial map of Hamilton from 1876. That entire map is fascinating and is well worth a few minutes of your time zeroing in on different neighbourhoods!

The Hamilton Glass Works closed in 1898 and torn down in 1920. On September 7, 1920 the Hamilton Spectator announced that the “ruins of the glass works at James and Macauley Streets, which have become a menace to life and limb are now being leveled.” We could discover no photographs of the glass works in operation, but fortunately many artifacts still remain to help us remember the factory and the people who worked there.