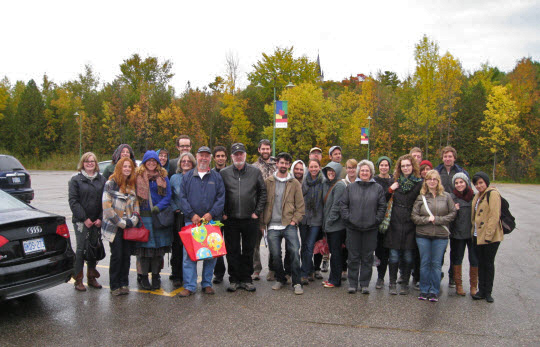 On Saturday, September 29, a group of approximately thirty ASI staff visited Huronia, the historic homeland of the Huron/Wendat nation in Ontario. It was a beautiful autumn day for a drive north, with the autumn foliage approaching its peak of colour.

The first stop was the Huronia Museum in Midland, where Jamie Hunter, curator of the Museum (plus long-time colleague and friend), gave a tour of the reconstructed village and provided a thorough background to the archaeology of Huronia and the interaction between the Huron and other First Nations in the region with Europeans at the onset of the fur trade. Time was also spent inside the Museum viewing the wealth of precontact and historic First Nations material that is on display, along with many other exhibits of local interest. A number of collections from ASI’s excavation of Middle Iroquoian villages in Huronia during the 1990’s, are also curated at the Huronia Museum.

After lunch by the bay in Midland, we toured Sainte-Marie among the Hurons, the re-created headquarters for the French Jesuit Mission to the Huron Wendat people from 1639- 1649.

It was a full day but everyone came away with a better understanding of the context to the Huron presence on the north shore of Lake Ontario, at sites worked on by ASI.