Every artifact has a story to tell, as is the case with these three bottles excavated from the John Elford site near Courtice, Ontario.

This bottle from the Northrop & Lyman Co. of Toronto held one of many purportedly medicinal concoctions the company 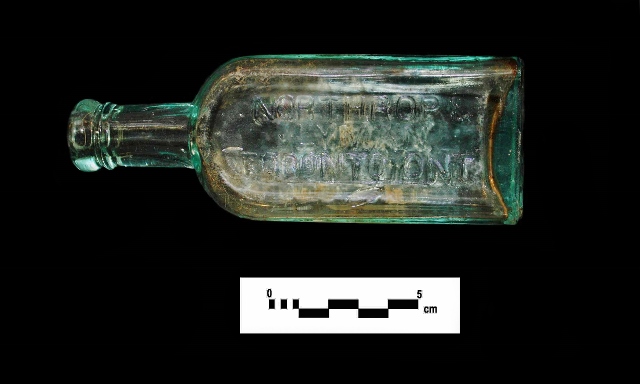 marketed out of its Toronto warehouse beginning of 1874. The history of the company is complex, as it grew from the retail drug store of Tuttle, Moses and Northrop in Newcastle, Ontario in the 1850s to Northrop-McGillivray Ltd. in the 1980s. The company was well known for its turn-of-the-century “cures” such as Dr. Thomas’ Eclectric Oil, Grave’s Worm Exterminator and its best seller, Parmelee’s Cough Balsam. For this bottle, information regarding the contents was likely contained on the box and/or adhesive label that has long since disappeared. The recipe likely would have been quite interesting as neither Henry Northrop nor John Lyman had received any pharmaceutical training. Although this seems absurd to us, it is unsurprising given the history of nineteenth-century patent medicine. 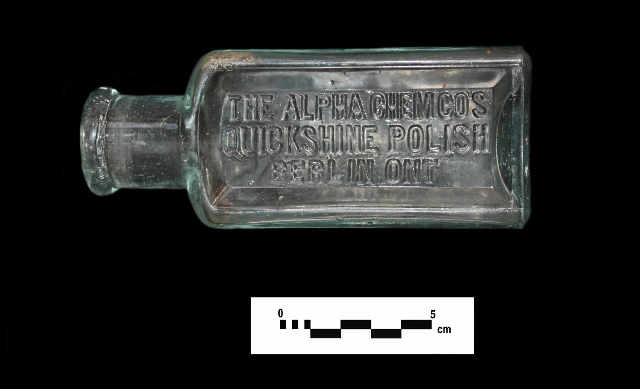 his bottle’s history reflects a time when anything and everything possibly associated with the “enemy” came under scrutiny. The embossed “BERLIN” on the bottle refers to the Ontario, not German, town. In 1916 when the Great War was bogging down in the blood-soaked fields and trenches of Europe, a movement began to rename Berlin, Ontario. The name change went to a referendum that was clouded in suspicion, riots, and violence. The campaign was a mess. Some patriots backed it to the hilt, the majority either hated the idea or ignored it. Of Berlin’s 15,000 eligible voters, only 892 voted to change the name and, of that number, 346 voted for the leading suggested name; Berlin (established 1833) became Kitchener, after British Minister of War, Lord Kitchener. In this writer’s option, it sure beats some of the other names suggested at the time, such as Huronto, Bercana, Durand, Canario, Empire City, Agnoleo, Renoma, and Hydro City.

This bottle contained sperm whale oil harvested from the forehead area of the whales. The oil was used to prevent rust 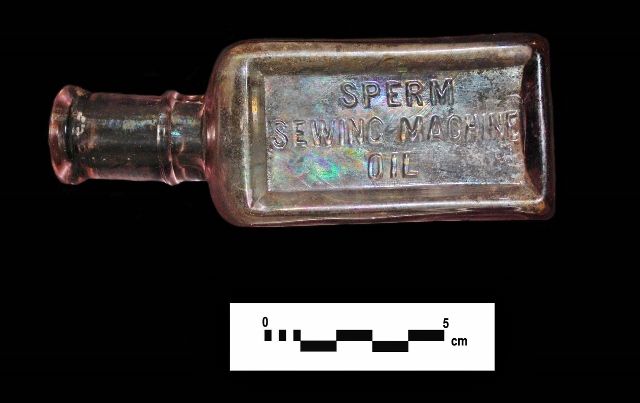 on machinery, lubricate machine parts (especially sewing machines), and, importantly, was the preferred fuel for lanterns as it gave off no od our. Unlike most known oils at the time, sperm whale oil (at least that portion marketed as “winter-strained”) remained liquid in freezing temperatures. This characteristic, combined with others, created a huge demand and whale slaughter began in earnest. The oil was so popular that Thomas Edison enthused in a period advertisement that Sperm Whale Oil worked great on his phonographs. Although the use of sperm whale oil for lamps was replaced by kerosene in 1853, the use of the lubricant continued in many industrial and mechanical applications. In fact, the use of whale oil in automobile transmission fluid continued until 1972 when the harvesting of the sperm whale was banned by the Endangered Species Act.