The so-called ‘Frozen Charlotte’ was a popular Victorian era doll made of white bisque porcelain. Its classic version is small and nude, with limbs moulded to the body. The dolls were mass-produced and inexpensive, the smallest version cost a penny. A sought-after toy, they were manufactured by the millions from mid-19th century into the early 20th century, with their heyday of popularly c.1850-1920.

The dolls originated in Germany and soon became popular in Britain and America. The earliest dolls could be painted with dark hair and red lips, but most were plain. Some later dolls took on further embellishments, including clothing. Although most were tiny, the dolls ranged in size from less than an inch to over a foot long. Larger dolls are said to have been meant for play, including in the bath, since they were often nude and could float in water, while the smaller variety might be baked into cakes as charms (Daly 2016). The small, breakable dolls were not made to last and could easily be replaced. Despite this, many have survived and are sought after by modern collectors. These small porcelain dolls are also found on historical archaeological sites in North America.

There are several modern misconceptions about these dolls. Perhaps the most prevalent is that they took on a new morbid association when introduced to the American market. A widely held belief is the dolls were associated with a 19th cautionary tale, based on an event in which a girl froze to death on her way to a winter ball. Some dolls are said to have even been sold in little coffins, because of this association. Just how much of the Frozen Charlotte tale is accurate and how much is a later invention? 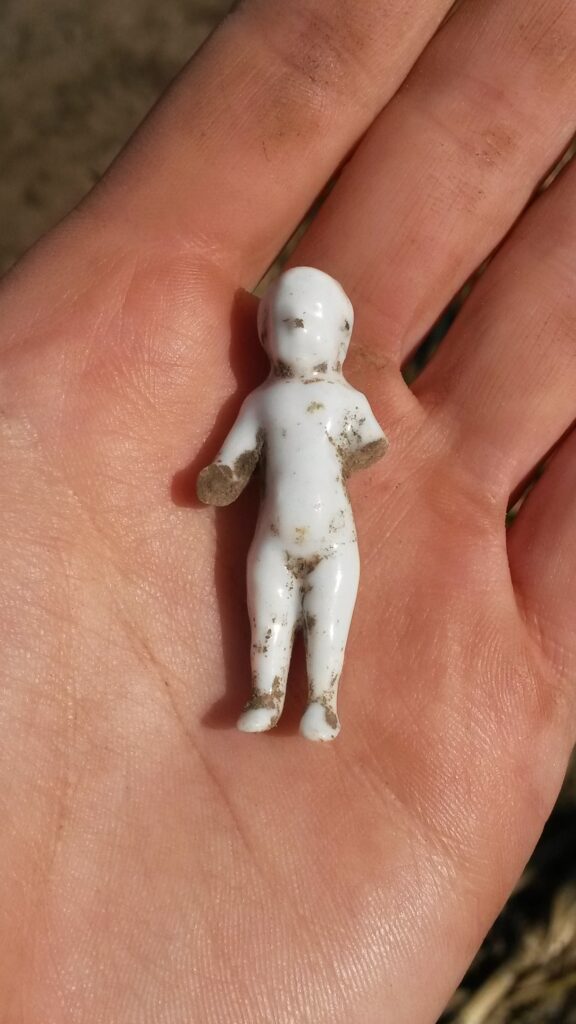 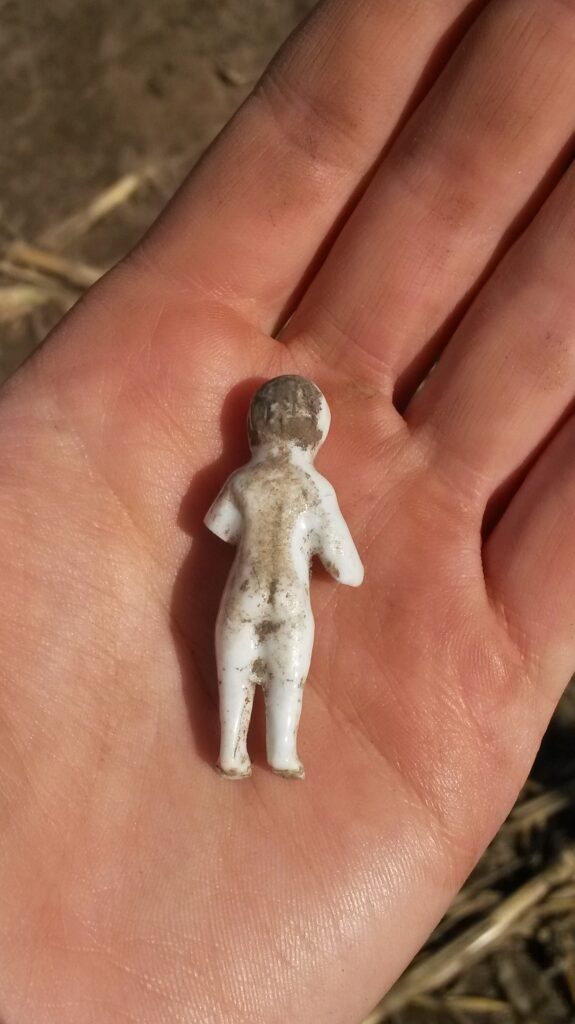 The origin of a name and a legend. 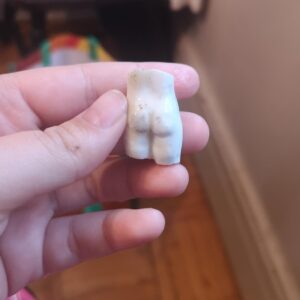 The Frozen Charlotte name is said to originate from an 1841 poem “A Corpse Going to a Ball” (by Mrs. Seba Smith) that inspired a popular American folk ballad (Taylor-Blake 2019). The poem itself was inspired by an event reported in the New York Observer, Feb. 8, 1840, about a tragedy said to have occurred on New Year’s in upstate New York. The tale caught the attention of the public, and in the early 1840s it was reprinted in numerous US and British newspapers.

The newspaper story does not name the couple, but Smith calls them Charlotte and Charlie and recounts their unfortunate tale. On a particularly cold night, the couple rode to a ball in an open sleigh. Heedless of her mother’s warning, the girl refused to wear warm clothing. Despite her suitor’s attempt to convince her, she would not use a horse blanket for warmth. Young Charlotte wanted to show-off her fine silk gown. When they arrived at the ball, Charlie found his love unmoving; she was a frozen corpse. Smith is said to have created the poem as a cautionary tale about a foolish and vain girl who disobeyed her mother and consequently froze to death. The poem in turn inspired a folk ballad (by William Lorenzo Carter) with slightly altered lyrics and known alternately as “Young Charlotte,” “Fair Charlotte,” and “Frozen Charlotte” (Taylor-Blake 2019). The lyrics add that Charlie’s heart was broken and the two were buried in a single tomb.

The doll arrived in the US at a time when this ballad was popular. Consequently, it is said, when Americans first saw the small porcelain dolls, they called them Frozen Charlottes because they resembled small, white corpses and were associated with the unfortunate story of Charlotte. The male version of the doll was said to have been referred to as a Frozen Charlie. A further claim is that children understood the doll’s symbolism, sometimes even placing them inside coffins in their play.

While the story might seem too morbid to have been told to children, at the time harsh morality tales were common. Children during the 19th century were not shielded from the potential dire effects of poor judgement. Nevertheless, despite the potential for parents to scare their children into good behaviour, there is debate as to whether this was when the dolls became known as Frozen Charlottes.

It is doubtful they were known by this name in the Victorian era. There is no mention of Frozen Charlotte dolls in American newspapers, magazines, or books of the period and adverts call them ‘China, or Penny Dolls’ (Taylor-Blake 2019). Nor is there evidence the dolls were regarded as representative of a girl who froze on her way to a ball. Also of interest, an 1896 psychology study of dolls does not mention a Frozen Charlotte at all. This study was based on a survey conduced in Massachusetts, about how children of the period (and their parents) played with dolls. Their list of dolls does not include a Frozen Charlotte, nor is there mention of a penny doll associated with death rituals, even though the study does discuss how children perform ‘doll funerals’ (Hall & Ellis 1897). This suggests that at the end of the 19th century, there was no doll known as a Frozen Charlotte associated with the popular cautionary tale. Furthermore, even though doll-sized caskets did exist at the time, penny dolls do not appear to have been commonly sold in coffins. They are usually discovered as small, naked, stand-alone figures.” 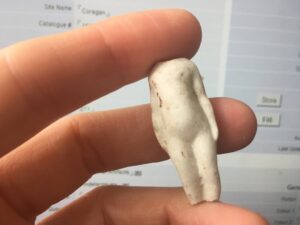 So how did the story of Frozen Charlotte become associated with penny dolls?

It seems likely the name and its association with the tale of Charlotte was a mid-20th century invention, told after the height of their popularity with Victorian children.

The first evidence for use of the name Frozen Charlotte in association with the legend is in American newspapers in the 1940s. Penny doll collectors and reporters writing about these collectors, used this name and sometimes referred to the 19th century tale (Taylor-Blake 2019). The early collector descriptions do not claim the Victorians associated the dolls with the Frozen Charlotte tale, but by the 1950s, collectors’ advertisements do start to make this claim (ibid.) and so the connection began. Doll collector and historian E. St George (1948) wrote that Frozen Charlotte appeared to have been a recent name and since doll collecting had become popular, imagined legends were sometimes created by collectors and dealers. She also mentions that as a child, she played with these dolls; the small were called ‘penny dolls’ and the large ‘25-cent dolls.’ This corresponds to what is seen in advertisements from the time.

While the newspaper story of a girl allegedly frozen on her way to the ball did inspire a mid-19th century poem, which in turn inspired a popular American folk ballad, association of this tale with the porcelain Penny Doll appears to be a mid-20th century invention by collectors to create intrigue. The dolls were mass-produced, inexpensive, and popular in their heyday. A century after their introduction, they became a prized collector item but they do not appear to have had any initial link to the cautionary tale of the unfortunate Charlotte.

Ambrose, Kevin.
“The chilling story of ‘Frozen Charlotte’ and the corpse-like dolls that bear her name.” in The Washington Post, December 8, 2019.
https://www.washingtonpost.com/history/2019/12/08/chilling-story-frozen-charlotte-corpse-like-dolls-that-bear-her-name/

“The Tale of Frozen Charlotte.” in Beachcombing Magazine, October 15, 2019.
https://www.beachcombingmagazine.com/blogs/news/the-tale-of-frozen-charlotte