A Bold Vision between The Forks

Don Mills Crossing is a unique place within the City of Toronto, featuring an expansive, iconic modernist architecture. Created in answer to the growing Toronto population during the post-war period, Don Mills and Flemingdon Park developments were designed as complete neighbourhoods that combined residential, institutional, and industrial buildings with interspersed green spaces. These new communities became the blueprint for post-war suburban development in Toronto.

In November, 2017, ASI was contracted by the City of Toronto to conduct a Cultural Heritage Resource Assessment (C.H.R.A.) to ensure that properties of cultural heritage value or interest were appropriately identified, understood, and conserved as part of an up-to-date planning framework for the Don Mills and Eglinton area. This Cultural Heritage Resource Assessment informs the Don Mills Crossing Study, an initiative led by the City of Toronto that examines ways to focus and shape anticipated growth around the intersection of Don Mills Road and Eglinton Avenue East. The Study is anchored by the transit infrastructure being constructed as part of the Crosstown L.R.T., and includes consideration for investment in employment lands, public realm and built form direction, new affordable housing and community services and facilities, and connections to the area’s natural heritage.

Our parameters for this project were to:

The Historical Context of the Don Mills Crossing Study Area 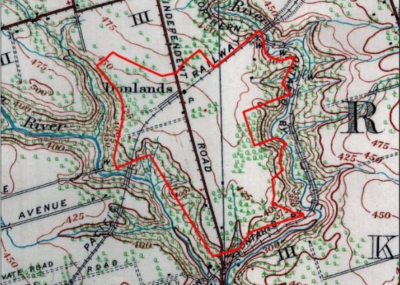 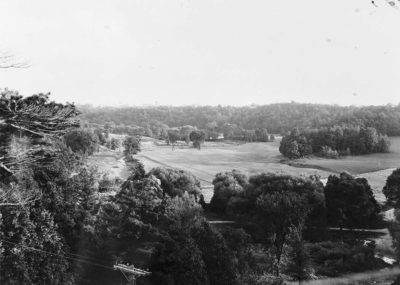 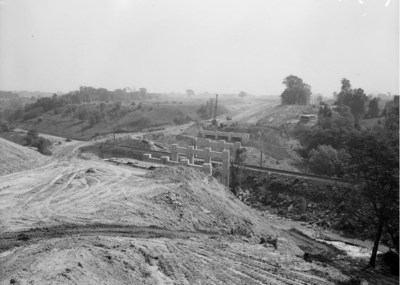 Human life in Don Mills extends back more than 12,000 years ago when the area more closely resembled the sub-Arctic. The area between the twin branches of the Don River was rich in resources. People from a multitude of Indigenous nations lived here, and during the Contact Era French explorers and missionaries passed through. The first European survey was conducted in 1791 when Augustus Jones set about clearing the land for his homestead. The remote area, bordered by two deep ravines each containing a fork of the Don River, did not see much development during the next century. The area remained relatively pastoral right up until the 1950s when an established industrialist saw its potential and embarked on a development experiment unlike any ever undertaken in Canada.

In 1955, developer Robert McClintock purchased lands owned by the Fleming Estate east of Don Mills Road and Eglinton Avenue East. A total of 350 acres were sold in 1958 to Toronto Industrial Leaseholds (T.I.L.), which acquired an additional 250 acres the following year. T.I.L. was affiliated with developers Webb and Knapp Canada and together they established Webin Community Consultants.  Flemingdon Park was conceived in 1959 as a modern town of 14,000 people, containing rental buildings, commercial districts, transit and community facilities. The development was promoted as “a residential all-rental housing development of exceptional architectural charm and variety” targeting an affluent, urbane market. The neighbourhood was designed by Macklin Hancock (who also designed Don Mills), with residential architecture by Irving Grossman. 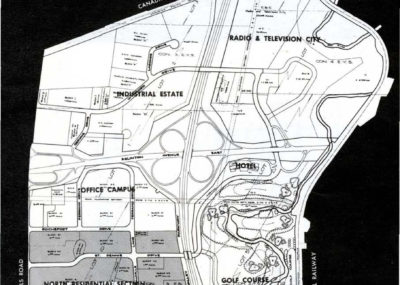 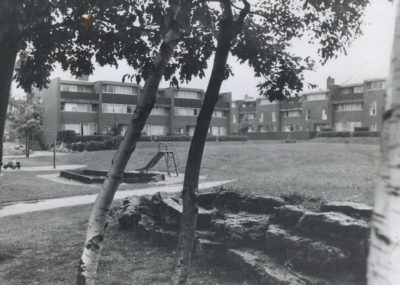 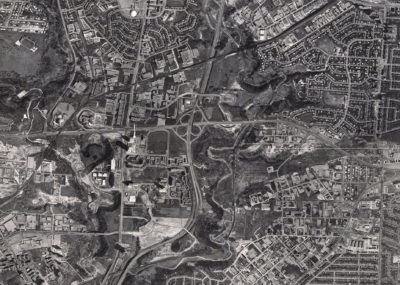 Aerial View of Don Mills in 1967 (City of Toronto Archives)

The ambitious plan included dozens of buildings, land designated for industrial use and a portion on the east side  of the Don Valley Parkway and north of Eglinton Avenue East that was intended to become the new headquarters for the Canadian Broadcasting Corporation (C.B.C.). The Industrial area was designed following standards that aligned with those previously established by the Don Mills development to the north. Flemingdon Park was constructed in the Modernist style: open green spaces; a reliance on pedestrian walkways; a rejection of traditional housing forms; separation of land uses; and favouring meandering roads rather than a street grid. Meandering roads accommodated both automobiles and pedestrians and provided an aesthetic quality to the neighbourhood that was accessible to both groups. In the Flemingdon Park plan, the residential area to the south of what was slated to be the Office Campus on the southside of Eglinton Avenue, is referred to as the “Flemingdon Park Garden City.” The housing that was constructed offered the greenery of Don Mills, but no private space. Common open spaces were located in courtyards, while units in apartment buildings shared long corridors and units in townhouses shared winding walkways. The intention was to allow residents to walk a distance of up to 1500 feet along paths encircling a tree-lined square and a sunken garden without encountering any vehicular traffic, which was routed within communal underground parking areas beneath buildings. A hierarchy of roads were created. Beyond the internal circulation patterns, the Flemingdon Park Provision Planning and Technical Report (Project Planning Associates Limited 1959) noted the site’s central location, highlighting the importance of new connections created by the Eglinton Avenue East extension and the new Don Valley Parkway roadways as a means of ensuring that residents could reach their places of work downtown or in Scarborough, Leaside or Don Mills.

ASI ultimately identified and evaluated 30 properties with potential cultural heritage value. From those candidates, 19 properties were identified as meeting criteria based on design, historical and contextual values as outlined by the Ontario Heritage Act. They were recommended for consideration into the City of Toronto’s heritage register. Properties include examples of company offices, town houses, slab apartments, and high rise towers. Several structures are associated with eminent architectural and design firms that were attracted to the area to leave their personal and unique mark on Don Mills.  As stated in ASI’s report to the City of Toronto:

“Most of the identified properties are located within the planned communities of Don Mills and Flemingdon Park and have design, historical and/or contextual values. These properties retain buildings and landscape features that are: early or representative examples of the International Style and of modernist design principles; early examples of the use or application of construction methods or materials engineered in the mid-twentieth century; associated with significant architects, builders, or designers; and valued for their craftsmanship or artistic merit.”

The Importance of Heritage in Future Planning

Cultural Heritage Resource Assessment studies are an essential part of the heritage conservation and planning process. The documentation that is completed at this stage lays the groundwork for future conservation. The Don Mills Crossing project was instrumental in prioritizing the conservation of heritage during the redevelopment of the unique Don Mills and Flemingdon Park neighbourhoods—home and workplace for over 50,000 Torontonians.

Heritage is not limited to its landmarks, views and landscapes; rather, residents also value the contribution that heritage brings to their local neighbourhoods. It is these everyday historical places where lives are played out. Understanding local character means that, as places change, they can still hold on to what makes them distinct. For this reason, it is necessary to ensure that development integrates with the surrounding context and adds value.

If you would like to learn more about the Don Mills Crossing project, you can read our complete site report here.