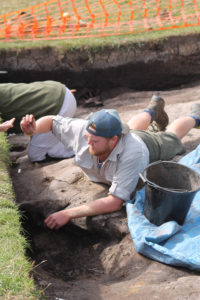 When Tom Lally isn’t travelling throughout Southern Ontario as part of our survey crew, he is a one-person travel bureau for the great nation of Australia.

Gday blokes and sheilas, my name is Tom Lally (or just ‘The Aussie’) and I am a Field Tech on Rockin’ Robbie Bhardwaj’s awesome Survey Crew in Burlington. I became an archaeologist after developing an interest in Ancient Egypt from a very young age, although I fell into it when it came to choosing my Uni preferences after Mum told me I probably wasn’t smart enough to become a well-paid engineer. Jokes on her though, because I’m raking in the cash in archaeology!

I undertook all of my university education at the mighty Flinders University in Adelaide, South Australia, which included a Bachelor Degree and Graduate Diploma, both in Archaeology. On the day I handed in my thesis though, I jumped on a plane to the UK, and spent the next 3 years there working as a commercial archaeologist as well as a senior staff member on a research project. Needless to say, many “convict returning home” jokes were made by the ever clever British peoples, and so when I grew tired of them, I thought why not freeze my bum off in Canada for a while instead. And so here I am now, coming up on 12months in Canada and with ASI.

If I wasn’t an archaeologist I probably would have been Chris Hemsworth’s body double in the Thor movies, or a member of the Thunder From Down Under men’s dance troupe in Las Vegas.

My favourite historical figure is the mighty William Wallace. Who doesn’t like a 6ft8 angry Scotsman with a massive sword and a strong difference in opinion with the English? Sadly, Braveheart does not do that man’s life story justice at all, considering Robert the Bruce was actually known as ‘Braveheart’, not Wallace.

If I were an artifact I would obviously be a shard of Neolithic pottery; crude, not massively attractive, but gets the job done.

My favourite site memory so far with ASI is the day I found my first (mostly intact) projectile point. I was so excited to have finally found one, only to have Robbie B find a full point minutes later, and inform me that mine was less meaningful as it had no base. Cheers Robb!

My least favourite thing about archaeology is that Tony Robinson (host of Time Team), became the face of archaeology in the UK. Should have been Me!

To pass the time on site, I like to do the job I get paid to do, whilst also sharing with my fellow crew members the intricacies of the Australian lifestyle, language, animals, and most importantly, Drop Bear safety protocols. Drop Bears being a very dangerous marsupial in Australian forests.

When I’m not working, I like to play the greatest sport in the world, Australian Rules Football. If you don’t know it, you should, it’s amazing. I promise once you watch it, you’ll never watch anything else again. I currently play for the Hamilton Wildcats (yes, Ontario has an Aussie Rules league), and I suggest you get on board as we are heading to the finals and with me in the team, we simply can’t lose the Championship.

If I could go back in time and excavate any site in the world, I would choose Stonehenge.After becoming a massive British Prehistory buff through my time there, no site compares to it in that time period. Throw in the fact that after all the amazing finds, and years spent there, no one still has a clue what it’s even for, and it has me hook, line and sinker.