As part of our historical recipe project, our Assistant Manager of Communications Caitlin Coleman brought in Dolly Varden cake!

Dolly Varden is a Charles 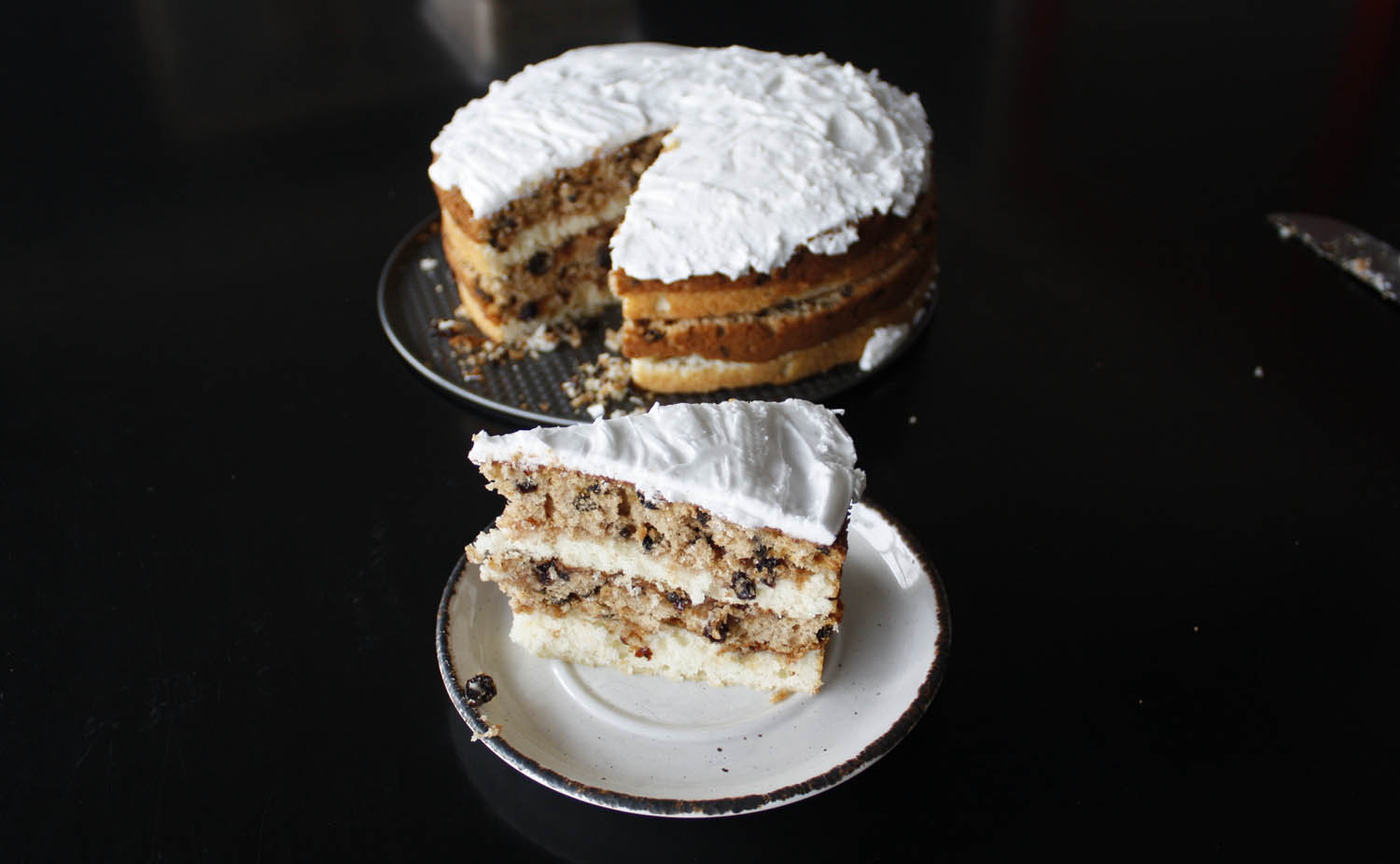 Dickens character from his historical novel, Barnaby Rudge, which was set during eighteenth century anti-Catholic riots in London. The novel was never one of Dickens’ big hits but the character Dolly, a young, charming and fashionable girl, became incredibly popular. Dolly triggered a resurgence in colourful eighteenth century fashions in the mid to late nineteenth century, as well as inspiring many songs, a comic opera, a style of dress, a type of brightly coloured fabric, and a coquettish style of hat. But it didn’t stop there! Soon Dolly Varden also became the name for a mountain range in Nevada, a railroad and mine in British Columbia, a style of dressing table, the name of many nineteenth century baseball teams, and a species of trout.

If you’re confused about how a minor character in a Dickens novel became so popular, people in the nineteenth century wondered the same thing. R.C.F. wrote into the “Our Young Folks” magazine in 1865 trying to understand Dolly’s sudden prominence, and her connection to the new fashion:

“…concerning the all-important personage Dolly Varden. I want to know whence the idea of her dressing so outlandishly is derived. I saw in some magazine that she was taken from Dickens’s account of her in “Barnaby Rudge” – I have read that book through and find nothing said about her dress except that she wore a cherry colored suit. And instead of being crazy, she was always setting other people crazy, especially those of the masculine gender.” (Our Young Folks: An Illustrated Magazine for Boys and Girls, Boston 1865, p.638.)

The Dolly Varden dress featured bright colours and bold patterns, and usually had two different fabrics. The dress had a plain underskirt with a patterned polonaise on top, which was tucked up and ruffled so as to show the layer underneath. It was this vivid layering that inspired the Dolly Varden cake. Two types of cake, one light and one dark, are paired together to form a multi-coloured effect. 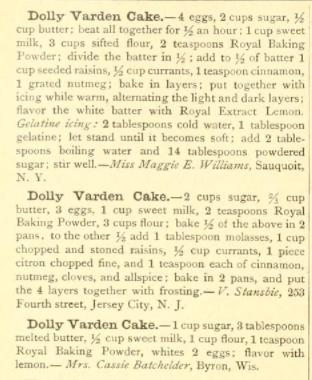 m. I focused on a cook book titled “My Favorite Receipt” which was published by The Royal Baking Powder Company in New York City in 1909. This book features a whopping ten recipes for Dolly Varden cake! I used the recipe provided by Miss Maggie E. Williams, from Sauquoit, N.Y., while also taking a few suggestions from the surrounding recipes.

The Dolly Varden is a pretty cake which would be appropriate for company, while also not being too difficult to make.  A single cake batter is mixed up then divided, and spices and dried fruit are stirred into one half of the batter. I decided to also add some molasses to the dark layer for some extra depth of flavour (per V. Stansbie, 253 Fourth Street, Jersey City). Once baked, the multi-coloured layers are stacked up to make a very attractive cake. Miss Williams suggests putting frosting between the layers, but other recipes suggested jelly, which I thought sounded nicer. After a quick check to see what was the most popular jelly recipe in “My Favorite Receipt” I chose a red currant jelly.

For the frosting recipe, I felt a little conflicted. Many Dolly Varden recipes called for frosting that involved raw eggs, which I didn’t feel comfortable feeding to my co-workers. Instead, I chose the “boiled frosting” from Fannie Farmer’s 1896 Boston Cooking School Cookbook. This frosting is essentially a soft meringue that serves the double purpose of a sweet coating, and also forming a thin crust that would help preserve a cake. I had trouble with my frosting getting a bit too thick, so I loosened it with some lemon juice and placed a simple layer of icing on top. A proper Victorian cake would have been decorated much more elaborately.

I was quite pleased with how the cake turned out, the spice layer in particular was very flavourful and moist. The method was simple, and the two toned cake was very pretty! 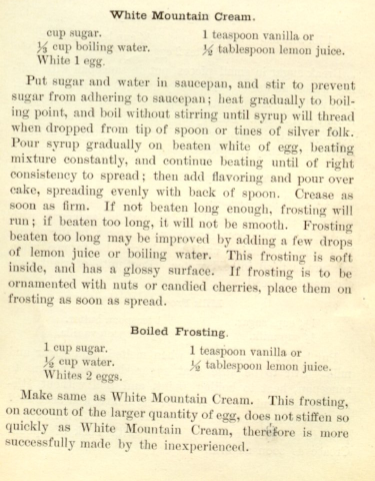 1. Grease two 9″ pans with tall sides and preheat the oven to 35oF

2. Cream butter and sugar and add in eggs one at a time. Stir together the flour and baking powder and add to the creamed mixture in three additions, alternating with milk. Stir in lemon extract.

3. Divide batter in two, and place half into one of your prepared pans. Stir currants, spices and molasses into the remaining batter and spoon into your second pan.

4. Bake for 20-25 minutes, until cake springs back when lightly touched. Let cool slightly and then turn out of pans.

5. Split cake layers in half and sandwich together with jelly, alternating light and dark.