While excavating a nineteenth century farm site in Halton region, we uncovered a small turn of the century advertisement.

This large token has no monetary value, serving instead as a pocket sized promotion for an agricultural tool; T.E. Bissell’s disk harrow cultivator. Likely distributed at a county or agricultural fair, this marketing item is a window into the fascinating story of small town manufacturing in Elora, Ontario.

When Elora was incorporated in 1858, it was a diverse centre of small industry, using its prime location along the Grand River to house a flour mill and distillery, as well as a foundry, machine shop, and cabinet factory. Elora was a bustling place, but it needed to attract more and larger industries if it was going to continue to grow and remain prosperous. In 1873 the Elora Manufacturing Company formed, filling a market void as the only carpet factory in Ontario. The Company proved to be a failure, unable to survive the vagaries of the international marketplace; the carpet company closed down taking the savings of many of the town’s most prominent citizens with it.

Into this breach stepped Torrence Edward Bissell, a young manufacturer from nearby Fergus, who took over the empty carpet factory in 1901 and began to produce farm implements. He specialized in the disk harrow, a tool that used small sharp wheels to till the soil or chop unwanted weeds or crop remainders. T.E. Bissell was a savvy businessman who kept his company afloat for 34 years, becoming the largest disk harrow manufacturer in Canada. By the 1920s he was by far the largest manufacturer in Elora, and personally funded the building of Elora’s hydroelectric dam and power station after the town council balked at the estimated cost. Staying in Elora allowed Bissell to be the large fish in a small pond. He had a large influence in the community, heavily funding the United Church missionary work.

Elora still features many landmarks in his name, including the Bissell Dam and the large Bissell Park, home of Riverfest, which features a boardwalk along the Grand River.

Through product specialization, Bissell overcame the difficulties of fluctuating international markets that proved to be the undoing of the Elora Manufacturing Company. He made one tool very well and never attempted to expand his reach, which allowed the company to stay nimble and co-exist with the large farming implement manufacturers. Bissell himself was a very strong personality who kept strict command of his company. He was obsessed with control and security and was the final authority for all decisions in his company. He refused to take on debt, and ruthlessly pared down on his workforce when times were tight.

Bissell retired and sold his company to a larger manufacturer in 1928. Unfortunately the new owners were never quite as successful at marketing his niche product, lacking Bissell’s unique flare for business that included advertising tokens and county fair exhibitions. In 1954 the new company went bankrupt, the factory closed, and two hundred jobs were lost. The closure marked an important moment in Elora’s history, as the town shifted away from its manufacturing roots to become a bedroom community for nearby industrial centres. 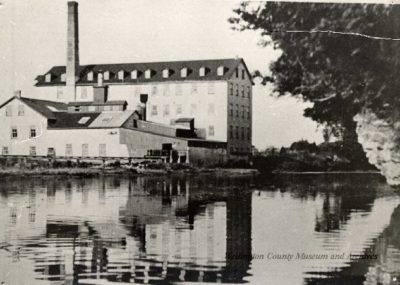 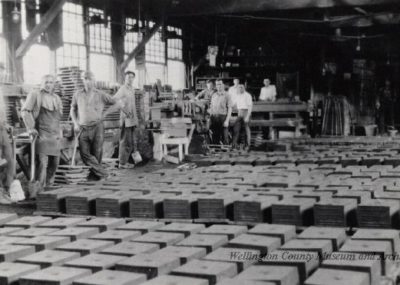 Centre Wellington Hydro
“History of the Electrical Industry in Fergus and Elora”
http://www.cwhydro.ca/pdfs/History_of_the_Electrical_Industry_in_Fergus_and_Elora.pdf