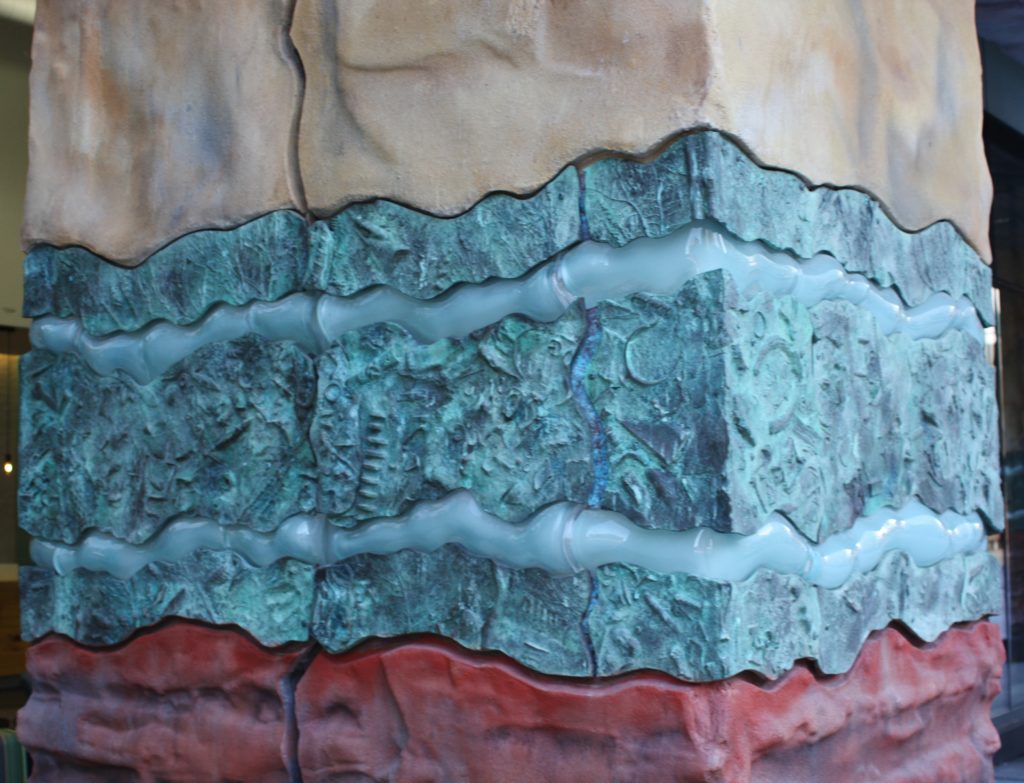 New Brunswick artist Peter Powning recently completed a large sculpture installation, commissioned by the Daniels Corporation, for the entranceway to the Cinema Tower condominium at 21 Widmer St (King St and John St, downtown Toronto). The Cinema Tower is closely associated with the Toronto International Film Festival (TIFF) Lightbox building, which is located directly beside the condominium.

Once home to the first Toronto General Hospital, the intersection of King and John is an historically significant area in the downtown core. The two-storey hospital first opened in June of 1829 and soon afterward other buildings were constructed nearby, including a hospital for cholera patients, an “Emigrant Building” and numerous structures to care for typhus, or “ship fever,” patients (for the waves of Irish emigrants that arrived in the city after the potato famine). The site of the Toronto General Hospital, which was demolished in the 1860s, is now partly developed by the TIFF Bell Lightbox. (To read more about the hospital project and the finds, visit our TGH Featured Project.)

Traditionally, cultural sites are marked by commemorative plaques or exhibits but art installations are an engaging alternative form of public heritage interpretation. In connecting the city’s past to its present and establishing the links between artifacts and art, Powning created a work that truly exemplifies Toronto’s rich and interesting history.

To create the entranceway to the Cinema Tower, Powning cast many artifacts from the Toronto General Hospital site to include in the piece. Entitled “Strata,” the sculptured entrance is made of cast bronze, slumped glass, precast concrete and LED lighting. Powning explains the idea behind the piece and its title, saying:

“The concept for Strata is an imagined core sample of the geology below the building drawn up from the depths. The precast concrete is sculpted and stained as a vivid, dreamlike vision of stone. The bronze relief represents what I’m calling ‘the human era’ as an ‘archaeological crust’ devised from artifacts mainly found on the site. The three bronze strata loosely represent pre-European history, the post contact/modern era, and possibly a post-human era or at least a future in which our footprint is very light. The glass represents aquifers. The building is Cinema Tower and associates itself with TIFF. There is a theatrical movie-set quality that informs the concept as well.”

In addition to the various layers, slumped glass “aquifers” included in the archaeological crust glow in the dark. Powning worked on the components of the installation for the better part of five years, while the physical work was completed in the last two. The piece was installed in the entranceway in August and September of 2013.

Powning has since returned to ASI’s headquarters to cast even more objects for another commissioned piece he is working on. See our Facebook album of Powning working recently in our boardroom, casting more objects for the sculpture. For more information on the artist and his other pieces, visit his website at http://www.powning.com/

Thank you to Peter Powning and Alexis Dunlop for all their help with this post.