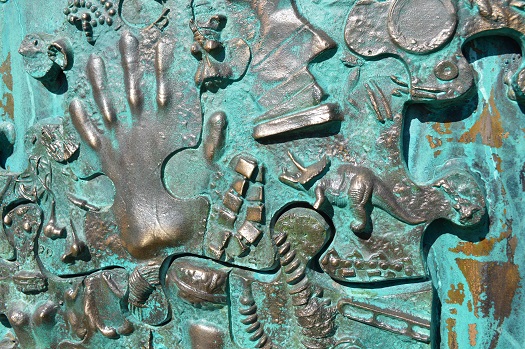 Last month, ASI’s Alexis and Claire attended the official unveiling of Peter Powning’s latest installation, entitled “Spire Stelae: Impressions of a Community,” at Cranbrooke Village condominiums at Bathurst Street and Saranac Boulevard in North Toronto. Peter is known for his bronze reliefs and he often casts objects brought to him from members of the community to be included in his pieces.

“My intent, with this project, was to create two, related sculptures of a scale that had impact from a distance, as well as providing an intimate visual and tactile experience at close range. The project offered opportunities for discovery, an enhanced sense of local identity and educational opportunities, based on archaeological, historical and contemporary artifacts from the site and surrounding area.”

Peter considers the cast bronze relief a “cultural mulch,” as it incorporates both historical and contemporary artifacts from different people with different backgrounds.

There were a significant number of historical artifacts included in the bronze installations at Cranbrooke Village and ASI was happy to work with Peter again on this project. ASI contributed artifacts from the first Toronto General Hospital site for Peter’s installation “Strata” entranceway at the Cinema Tower Condominium at King and John St., downtown Toronto.

For his latest bronze reliefs, ASI provided artifacts from the Stage 3 archaeological assessment of The Asbury and West United Church, which is located on the same property as Cranbrooke Village. The original church was a frame building built in 1845, but it was destroyed by fire in 1898. It was replaced by a brick building in 1899, which remains today. A total of 1,627 artifacts were recovered during the excavations beside the church and the objects reflected the church’s use as a place for community gatherings in the nineteenth century. The recovery of pearlware and black-printed ceramics of the early nineteenth-century indicate that some of the finds belonged to the an earlier dwelling – before the church was built.

Peter cast a number of these artifacts and they can be seen in the installations – if you can find them, of course!