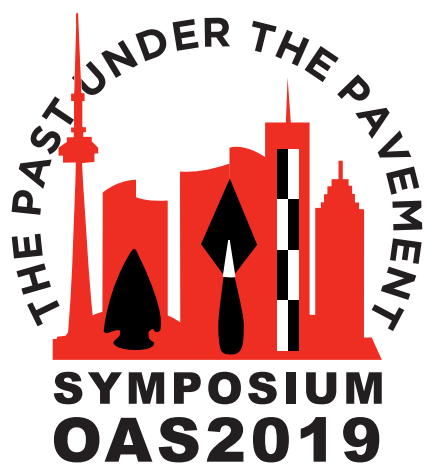 As always, ASI is participating in the annual OAS Symposium, taking place this year in Toronto from November 1-3, 2019. The theme for this year’s symposium is The Past Under the Pavement: Archaeology in the City.

The Symposium is taking place at the Chelsea Hotel, and you can still register for the conference in person, if you haven’t registered in advance.

There are many great papers, workshops, and posters on the roster this year! Check out the full program here.

On Friday, November 1st, Partner David Robertson is participating in a workshop on: Artifacts and Asphalt: MHSTCI Urban Archaeology Workshop, which will be chaired by Meagan Brooks (MHSTCI).

Topics that will be addressed in the workshop include:

These topics will be presented using case studies from successful urban excavations as well as input from experienced urban archaeologists and specialists. It will also include an open discussion to address common concerns of archaeological consultants and help provide solutions to enhance and clarify the urban assessment process.

On Saturday November 2nd, our Senior Archaeologist Eva MacDonald is chairing a session: “Archaeology in the City or of the City? An Examination of Urban Archaeology in Ontario.”

Urban archaeology can be defined two different ways. The first definition recognizes the methodological challenges posed by working in an urban environment, such as deeply buried deposits, complex stratigraphy, or sites composed of multiple city blocks. The second places emphasis on the theoretical distinction of urban archaeology in its ability to examine the experience of past city dwellers through many different lenses, including race, class, gender, and ethnicity. Today’s session will introduce case studies from across the province to highlight this diverse and challenging subdiscipline of historical archaeology.

Also on Saturday, our founder Ronald F. Williamson, is co-chairing a session with Robert von Bitter: “The Seventeenth Century Iroquois du Nord: History, Archaeology and the Search for the Villages”

Location: Rosetti B, the Chelsea Hotel

In the mid-to late 1660s and early 1670s, the Huadenosaunee established a series of settlements at strategic locations along the trade routes inland at short distances from the north shore of Lake Ontario. From east to west, these Iroquois villages consisted of Ganneious, on Napanee or Hay Bay, on the Bay of Quinte; Quinte, near the isthmus of the Quinte Peninsula; Ganaraske, at the mouth of the Ganaraska River; Quintio, on Rice Lake; Ganatsekwyagon, near the mouth of the Rouge River; Teiaiagon, near the mouth of the Humber River; and Quinaouatoua, on the portage between the western end of Lake Ontario and the Grand River. Ganatsekwyagon, Teiaiagon, and Quinaouatoua were primarily Seneca; Ganaraske, Quinte, and Quintio were likely Cayuga; and Ganneious was Oneida. Judging from documentary accounts from Teiaiagon, however, all the villages might have contained people from several Haudenosaunee constituencies.

These self-sufficient villages acted as bases for their own inhabitants but also served as shelter for south shore Haudenosaunee on their way to and from the beaver hunt beyond the lower Great Lakes. They also may have acted as “toll gates” for Anishinaabe fur brigades by which the Haudenosaunee could control the flow of furs to Albany. It has also been suggested that the continual harassment by the Andastes/Susquehannock on the south side of Lake Ontario was another reason some Cayuga, and probably some Seneca and Oneida as well, moved north.

One of these villages was also the site of a Sulpician mission, better known as the Kenté or Quinte mission for where it was based. Beginning with the Abbés Claude Trouvé and François de Salignac de la Motte-Fénelon at Kenté in 1668, various Sulpicians visited the north shore villages over the next decade. In 1676, Abbé Mariet set up a subsidiary mission at Teiaiagon.  It appears that most of the north shore villages were abandoned by 1688; their depopulation accelerated by hostilities with Anishinnabe and Denonville’s campaign against the homelands in 1687.

This session seeks to bring together traditional knowledge as well as documentary and archaeological evidence of this period and will focus on describing the historical context, efforts to relocate the villages and examinations of the unique material culture found at them and at similar settlements in the homeland.

Teiaiagon on the Humber River: Controlling the Western Branch of the Toronto Carrying Place by David Robertson

Come from the Shadows: Metals on the Iroquois Frontier by Martin Cooper